Thank You For Joining Me At Internet Income Intensive!

In case you aren’t aware yet, I conduct a seminar every few months called Internet Income Intensive.

To bring you up to speed, it’s a 3-day workshop where I show my students how to set up their own online business step-by-step. I’ll give a little theory, share my knowledge, then actually show you on my laptop how to actually implement what I just spoke about.

And the whole time participants will follow along with their own laptops.

My team is always on hand to guide everyone and help whoever needs support.

At the end of the seminar I personally guarantee that every single person will have their own website set up with a product of their own, and will make their very first sale.

In fact, I’ve said this before and I mean it, if anyone is unable to make a sale, I will have the doors locked and prohibit anyone from leaving until they get that payment notification in their inbox!

So for the past month or so I’ve been travelling around the country giving previews of my seminar. Last Friday was my biggest turn out yet.

Nearly 300 seats were filled in the Grand Hall of Eastin Hotel. I have to admit I was pretty overwhelmed by the sheer number of people and had to call my team to come in for support.

As you probably already know, I used to suffer from massive stage fright.

And for many years I made excuses to not speak in public.

Then I realized that the only person that was losing out was me.

Because I’d imagined myself holding my own seminar and teaching others how to succeed, but nothing ever came from it. I’d just dream and dream and never do a thing.

Which is how a lot of people feel about taking that dive into Internet marketing. Or anything for that matter… 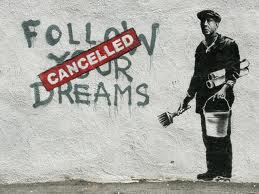 Do you have a dream that has been lingering in your mind for the longest time?

And you kinda know what you have to do to get there… but you don’t do anything?

You just think about it.

And wonder, what if? Or if only?

Then once in a while you get a kick on the ass and you actually think “Yes! I’m going to do it.”

You may even make plans. A handful of you may even take the first step. And then what..?

I’ve been there before.

After spending over $180,000 on seminars, at the end of each one I’m all fired up and ready to roar.

Then a day passes, and another, then it turns into weeks, months and it’s nothing more than a glimmer of the past.

Well, I refuse to do that anymore.

Now when I have an idea I voice it out. I tell my team so there’s no backing out. And we run with it.

So when I finally decided that I wanted to hold my own seminar, I planned, and I took steps, and most importantly, I followed through.

I attended speaking seminars and learned from the best. T. Harv Eker, Blair Singer, Tony Robbens. These guys are just three of my many mentors.

And when the opportunity arose to speak in public I jumped on it.

In fact, I sucked.

I had a a bunch of cue cards glued to my hands that would put the Lord of the Rings trilogy to shame.

I crafted my speech, wrote it out and read it out word for word.

And at the end of it, I got zero conversions. Not a single person was affected by what I had to say.

It was disheartening to say the least.

But it only made me realize my flaws and very quickly I amended them.

That brings me back to last Friday.

The largest preview I’ve ever held.

Speaking on stage to a crowd of 300 people.

Trying to teach them in 4 hours what I had learned in 7 years.

And the reception was amazing.

At the end of it, people were signing up to join me at Internet Income Intensive and I feel so blessed.

So my lesson here today is to persevere.

“Too many of us are not living our dreams because we are living our fears.”

If you are one of the many people who signed up to join me at Internet Income Intensive, I’d like to thank you for taking action on your dream. And I truly hope that together we can realize it.