I’ve been posting a lot about Internet Income Intensive lately, I know.

It’s bound to be on my mind for at least a while longer, since it did just end last weekend.

Yesterday, I did the event debrief with my team as I usually do.

I wanted them to be aware of what worked, what didn’t work, and what could have been done better.

The event did run smoother and faster than the previous III events I ran (I went through all the comment forms as well, and this is the first time all but one of the participants’ comments were positive), but as the saying goes: “There’s always room for improvement.”

The internet connection, for example.

And one comment mentioned that there should have been refreshments prepared.

The biggest thing I took away from this event was the realization that I really enjoy seeing and helping people grow. For me, it’s always been about helping others.

Those who have been following my blog are probably well-aware that I’m a personal development junkie.

Even at the event, when my team and I went around collecting video testimonials, I briefed my team to let people know that it’s not about helping ourselves – but to help and benefit others, as well as themselves. For example, facing their fear of being on camera.

One of the participants really touched me with her story of how prior to this seminar, she was scared of people because of how she was brought up.

But there came a point during the seminar where she really wanted to take the mic and speak, but she lost her chance to do so.

This taught her that in life, sometimes, you can miss out on opportunities. By the time she wanted to take the mic, there was no more opportunity.

For her, the big thing she took away from the seminar wasn’t internet marketing, but what it taught her about changing herself.

At the end of the seminar, she gathered her courage and gave me a video testimonial, despite her fears.

These are the stories that really touch me, that are close to my heart.

Because of this, I had an idea that has been keeping me awake for the past few days.

I kept wondering: How can I deliver more value to the participants?

It’s not so much about teaching them how to be successful in internet marketing, but the mindset of success behind it.

I really want to help people explore more about their own personal development. 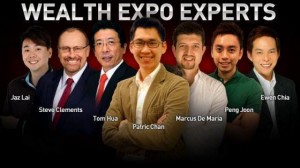 So, a few days ago, I was actually offered the chance to speak of one of Success Resources’ events – Wealth Expo 2013 Singapore.

It would be a really big opportunity for me, but I have to make a choice.

If I speak there, I have to give up on attending a course I had planned for months in advance.

My flight tickets to US were booked in March and I had the 6 week trip planned right down to the smallest detail.

At the same time, I really want to speak at the event.

I really agonized over this decision, so much so that I changed my flight ticket at least 3 times yesterday morning.

And then I realized: I could still attend my course, but I would just have to miss the last 3 days.

The only downside would be that I would have to spend more on the flight tickets.

I would also have to juggle things – but it would be worth it, to get the best of both worlds.

It’s still a big risk for me, but it’s one I’m willing to take.

I want to take the risk, if it means being able to help more people branch out and pursue their passions.

I also want to plan 2 more III seminars in September or October this year. one in Singapore and one in KL.

I know I’ve mentioned it before in previous posts, but if you’re interested, I’ll definitely be glad to see you there.