Build Your Own Mobile App in 12 Minutes

How would you like to earn a fully passive income in the mobile app market?

The reason I’m asking is because latest research has reported that the mobile app market will be worth $25 billion by 2015.

Well, guess what. You don’t have to settle for your imagination anymore. Because I know a guy who is revealing the secret to creating a fully-functional, professionally-designed mobile app. He’s created a really awesome system that takes you through the entire process step-by-step.

So you don’t need to have any technical knowledge whatsoever. And trust me, I know this guy really well. He’s about as tech-savvy as my left shoe.

The system is so easy-to-use you can have a complete custom mobile app created from start to finish in 12 minutes.

And I can totally vouch for this guy. I promise you guys, he’s the real deal. I’ve known him all my life. He’s one of the only people in the world that can (kinda) get away with calling me stupid to my face. His name is Peng Li aka Dylan. And he’s my brother.

Peng Li is a civil engineer and used to spend every hour of every day at construction sites. Well, it wasn’t for him.

And I was always at the receiving end of his endless whining and complaining. Yay for me.

So I was really pleased when he shifted his focus on something he genuinely enjoyed.

After months of working on what was simply a pet project, Peng Li created a system that allows you to make and monetize your own mobile app in just 4 simple steps.

My brother is crazy excited about this project. And after going through it myself, I gotta say, it’s really impressive. He named it Green App Machine.

So here’s the deal. Over 50% of Americans have smartphones with an average of 41 downloaded apps. With Green App Machine, you can be the proud (and very profitable) owner of one, if not more, of those apps.

Peng Li got our mom to try it out. (She’s about as tech-savvy as my right shoe, sorry ma…) And she actually made money. For real!

You’re probably thinking that I’m totally biased. Well, you know what? I am. Peng Li is my brother after all.

But I’m not so glazed over that I would insult your intelligence. 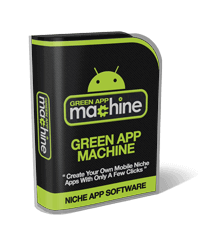 Green App Machine will not make you a millionaire overnight. You won’t be able to click one button, quit your job and spend the rest of your days lazing on some exotic beach.

Just with any other product, it requires work.

And what you get out of it, will be completely based on what you’re willing to put into it.

Here’s what you would definitely be getting.

A software that works.

One that really is so simple, you don’t need a programming background. So simple that even my mom can use it. And my brother. Who combined make up the technical knowledge of the shoes on my feet.

So check out the video here to see for yourself how to create a mobile app in 12 minutes.