Well, this weekend was tiring… and at the same time, nothing short of amazing.

My team and I were barely off the high from our Singapore III seminar and Joel Bauer’s visit before another III was looming on the horizon.

I know, barely two weeks after one seminar in Singapore… another one here in Malaysia. But that’s how things turned out, and the recent III is my last one for this year.

I was so excited this time around. The time I spent with Joel had given me some awesome new ideas which I couldn’t wait to implement. I had a few new ideas to make III better, as well as to provide the participants with more value than before.

Internet Income Intensive is known as one of the best seminars for Internet marketing training already, but I’m not one to rest on my laurels. I’m always looking for new ways to give value to people, to help them learn and grow. That’s why this time around, I changed some things around and tried out new ideas. And I think most of them worked out for the better.

One thing stayed the same from the Singapore III though – Ewen Chia also joined us again, to talk about affiliate marketing once more.

The crowd was amazing. I know I say that about the crowd at each of my seminars, but somehow it’s always true.

And what’s a III post without a mention of the Internet connection? It used to be such a pain.

This time around, though we had a few hiccups, everything was smooth for the most part, and I can’t ask for more than that.

I even managed to sneak out for a quick workout between sessions on the second day. 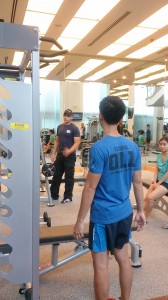 Yeah, that was how smoothly things went this time.

In general, I feel that this was one of the best III seminars I’ve run.

Also, a big shout-out to my team for running around, keeping things going well, and for generally being awesome.