Last weekend I attended Robert G. Allen’s “The Fortune In You.” It was a 3-day seminar that covered a lot on building the right mindset for success and how to become an infopreneur. That’s basically an information entrepreneur, i.e. someone who creates and markets information i.e. me. 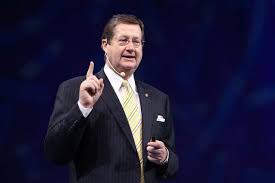 Robert’s best-selling books include Multiple Streams of Income, Nothing Down and The One Minute Millionaire, to name but a few. He made a name for himself by showing people how to purchase real estate without any money of their own. Robert is one of America’s most influential financial advisers and has appeared on hundreds of TV and radio shows, as well as being featured in numerous publications all over the world.

I brought half my Smobble team with me to his seminar because I wanted them to experience and learn from the New York Times best-selling author.

By now I’m sure you’re aware that I attend a lot of seminars and workshops all over the world. I am a personal growth junkie. And proud to admit that I am Success Resources’ best customer! Lol.

Going into a seminar I look at it from two different angles. The first is to learn from the content that the speaker is presenting. Because I know that I don’t know everything. So I’m always open to being a student.

And the second angle is to learn from the way the speaker himself presents that content. The wording they use, the way they control the room, work the stage, include the audience, present their upsell and so forth.

This is something that I constantly encourage my team to take note of. Because by watching great speakers, they can see how to present information in different ways to reach their audience, whether in a sales letter or eventually in a seminar of their own.

Personally, I think it’s impossible to not learn something from a seminar.

During one of the breaks, someone told me that they felt they didn’t learn anything from that weekend because they already knew the content that Robert was teaching. To that I replied that the takeaway of the weekend was that you don’t need in-depth, extensive, detailed, mind-blowing, groundbreaking content in order to be a speaker and have your own seminar.

Anyone can do it.

Then that person said that not only was the content so basic, but a large chunk of the seminar was about mindset. And it was something that had been covered in many seminars before.

And to that I replied that not everyone will have been to seminars. This could very well be their first. And so while you may be feeling like you’re listening to a broken record, to a lot of other people this is the eye-opening AHA moment that they never knew existed.

Again, there is always something to gain from attending seminars.

It’s just that you may have to look a little deeper to find your hidden gem.

The same goes for anything you do in life. Never look at any of your decisions or experiences as a waste of time. At the very least you can look back at a mistake and know that it was a waste of time so you’ll never make that same mistake again. Still a lesson to be learnt!

Stay positive, be positive. Look at things differently. And most importantly, take action to bring you closer to your goal.

I’m kinda rambling now. I’m on holiday. On a beach. Somewhere. It is awesome. I have learnt that I deserve holidays on a beach somewhere awesome.